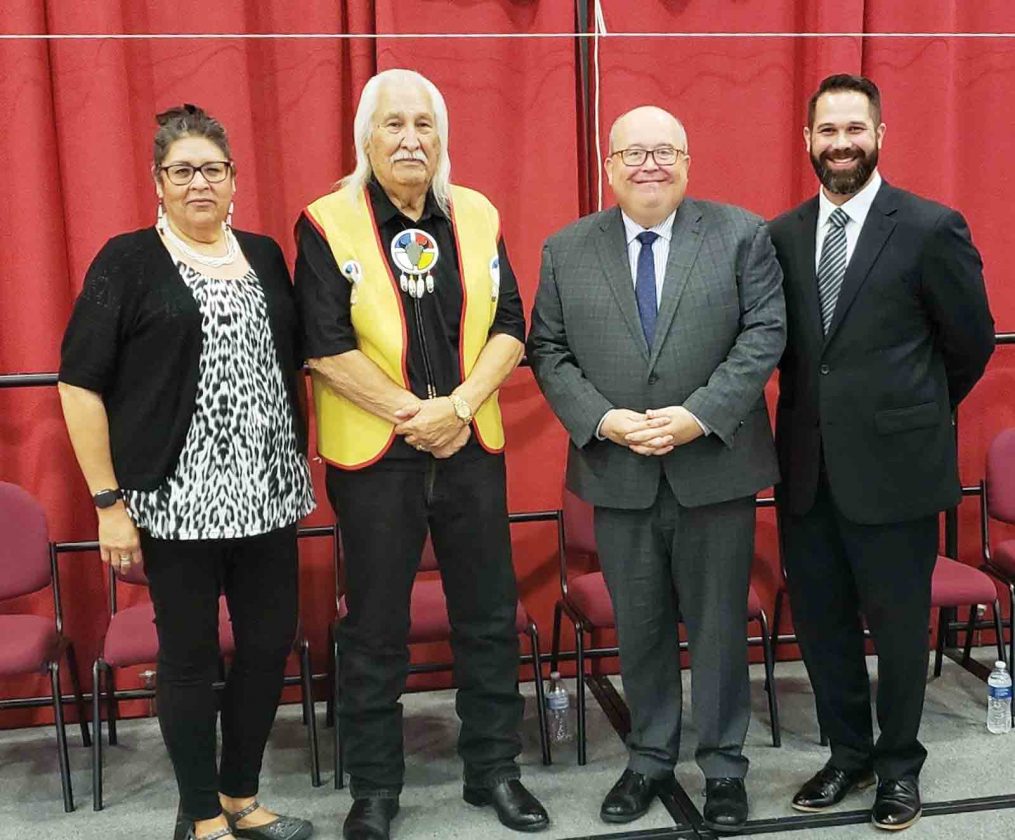 President Bordeaux assumed his life’s calling and the Presidency of Sinte Gleska University in 1973, making him the longest serving University President in the United States. He has received more awards over more decades of service than anyone can count, recently inducted into the inaugural class of the national Native American Hall of Fame. This is not, however, a man who sits around and counts awards. A tall and elegant man with flowing white hair, I work hard to keep up with the nimble 80-year-old mind of a distinguished statesman and a passionate warrior for his people.

His office is like a living museum and a timeline of the Lakota people, and only the strength of his character keeps me focused on our conversation rather than allowing my eyes to wander along the walls into the nooks and crannies, each one filled with a memory, many of those memories moments in American history in which he took part.

Dr. Bordeaux, however, is not a man living in the past. He respects it, reveres the sacrifices and the gifts of his ancestors, but he is clearly focused forward as he discusses the co-occuring tragedies of suicide, poverty, lack of economic opportunity, and hopelessness which consume far too many of the people he is working so hard to empower. He talks to us about families living on $3,000 a year, three suicides occurring within a one-week period, governments that make promises he is still waiting for them to keep, an educational model which was built on European rather than indigenous values, and the history of his people which is so often rewritten from the White man’s point of view.

He has every right to be angry at people who look like us, to shut us out or to associate us with an oppressive past. Instead, he welcomes us to his homeland and places us right at the center of the most important day of the University’s year.

Later that day, after taking part in the grand procession during which we walked with him and other elders and leaders, many in traditional attire, Indian drumming and chanting surrounding us, in a great circle around the huge room filled with graduates and their families, he rose to the podium at Commencement to confer degrees on more than 60 graduates, from GED recipients to master’s degree recipients. We could feel the palpable reverence his people have for him. Perhaps no one has given so much for so long to his people, and they know it.

I had the distinct honor of offering remarks to the graduates and presenting to him and his daughter, Vice President Debbie Bordeaux who is never far from her father’s side the whole day, the Generations Award from the National Institutes for Historically Underserved Students, one of the first awards presented to multiple generations of the same family who advocate for civil rights. It was easy to speak with humility in the presence of those assembled, but harder than usual to find words worthy of the moment. In the moment, I had met a 99-year-old tribal elder, a woman who might weigh a hundred pounds, who through sheer force of will had stood in the road, risking death, and stopped trucks sent to pillage her homeland. Yes, it was very easy to be humble in such a moment.

After Commencement, he shared his table with us and we enjoyed the bounty of food prepared for us and the whole community. Then we reluctantly said goodbye to our new friends, and I looked back over my shoulder as we drove away. Brady and I were quiet for a while because the moment we shared with the good people of Sinte Gleska University really defied the limitation of words. It still defies that limitation, even as I try to share it with you. I thought about the partnerships, the cultural sharing, I hope we will be able to forge between West Virginia University at Parkersburg and Sinte Gleska University. I thought about how I hope to take some of our students there one day and to welcome their students to West Virginia. I thought about the basic human understanding, the fundamental building block of real progress, which can occur with two such different parts of the world truly see each other and truly listen. I thought how I would measure my life a success if anything I ever did as a leader measured a minuscule fraction of what Dr. Bordeaux has done and is still doing.

At first I felt sad because a moment so important to me was over, but then I felt joyful and so very appreciative that I had been given a moment few people are given, a moment which I hope to repeat one day as the spirits of my ancestors are drawn again to South Dakota to be the guests of the spirits of their ancestors, and once again I sit in the presence of this good and great man and the people who love him.